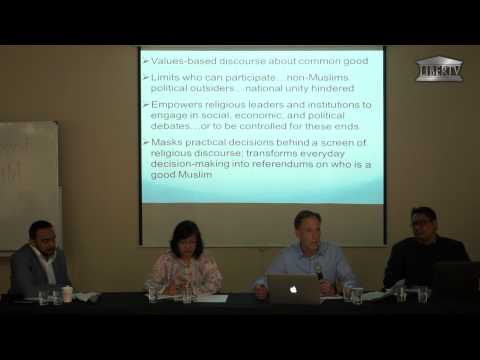 Roundtable Discussion on: The Future of Religious Freedom

Everyone has the right to freedom of thought, conscience and religion; this right includes freedom to change his religion or belief, and freedom, either alone or in community with others and in public or private, to manifest his religion or belief in teaching, practice, worship and observance.
(The Universal Declaration of Human Rights)

Freedom of thought, conscience and religion is clearly worded in Article 18 of the Universal Declaration of Human Rights in recognition of the inherent dignity and of the equal and inalienable rights of all members of the human family which is the foundation of freedom, justice and peace in the world.

And while religious freedom as a human right is knitted into the fabric of our constitution as stated in Article 11, there have been cases where this Article has been debated ferociously in the court of law in this country. And though Malaysia takes great pride in being a melting pot of different cultures, races and religions, co-existing under the purportedly “moderate Islamic nation” model, the populations remain divided along racial and religious lines. Race and religion are not only politically salient; they are also jealously guarded to protect inter-ethnic sensitivities.

Nevertheless, the vibrant development of human rights awareness and advocacy had introduced an additional element into the dynamics of pluralism in Malaysia. Human rights have become the standard talking points even amongst those in the vanguard of cultural, political, and religious conservatism. In Malaysia, cases invoking the right to religious freedom have garnered widespread attention and caused considerable public uproar in this Muslim-majority nation. They involve – although not limited to – apostasy, child conversions, and persecution against non-mainstream religious doctrines.

These cases raise pertinent questions about the parameters of religious freedom for Muslims and non-Muslims alike, especially when pitted against particular religious rules, societal norms, as well as the bigger idea of collective social responsibility and national stability. For studies have shown that there is not only a close connection between religious freedom and peace and security, but also to a country’s economic growth. Hence this forum will then dissect critically into the fundamental right to religious freedom in this country and look into other significant political, legal, and social dimension to the exercise of freedom of religion.