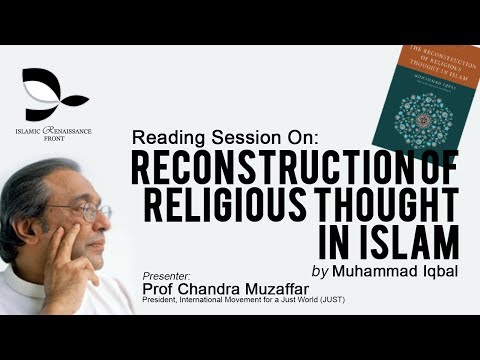 Reading Session On: "Reconstruction of Religious Thought in Islam" by Muhammad Iqbal

Muhammad Iqbal (1875-1938); poet, philosopher, and political thinker, requires no introduction. Iqbal’s intellectual personality was shaped first by classical Islamic learning and later by western education in Lahore. From 1905 to 1908 he studied in Cambridge, and later completed his doctorate on the development of Persian metaphysics in Munich. Iqbal dominated Islamic religious and political thought in the 20th Century, as did Sayyid Ahmad Khan in the 19th Century. There is no doubt that Iqbal is among the most important names of Islamic reformers, though the most important aspect of his work in Islam, goes beyond reform, but for a reconstruction.


“Iqbal did not use the term reformation as Sir Sayyid Ahmad Khan did, but he rather called his lectures ‘reconstruction’. Even literally, this term denotes an action, which aims at a new construction without changing the basis, in keeping with the requirements of age. Consequently there emerged two themes in his lecture i.e: (i) re-interpretation of the self, and (ii) dynamism.”
[Muhammad Khalid Masood, Iqbal’s Reconstruction of Ijtihad]

The main themes of Iqbal’s reconstruction are explained in his magnum opus, “Reconstruction of Religious Thought in Islam”, written way back in 1930. These key themes are still very much relevant at the current time. Iqbal touched on several important ideas for us to consider in living our religious life. These ideas, among others include; re-routing our vision on the emphasis of Qur’anic themes and ideas (emphasizing on the ontological reality of change and movement), the conception of Ijtihad, the importance of religious experiences, and Iqbal’s concept of self (khūdi) and selfhood. Iqbal calls for a reconstruction of Islamic thought, not only to go beyond the traditional framework, but also reconstructed to prepare Muslim intellectual reformers in facing the immense challenge of the modern world.


“Nor can the concepts of theological systems draped in the terminology of practically dead metaphysics be of any help to those who happen to possess a different intellectual background. The task before the modern Muslim is therefore immense. He has to re-think the whole system of Islam without completely breaking with the past.”
[Muhammad Iqbal, The Reconstruction of Religious Thought in Islam]

Thus, this reading session aims to re-focus our reading of Muhammad Iqbal, to the most essential aspect of his works, “The Reconstruction of Religious Thoughts in Islam”. The session will provide the audience with a brief outlook on the ideas presented in the book, which is relevant to our current challenges in the Muslim world in the 21st Century. As if we look and ponder the fate of our Islamic ummah today, the future lies not just in minor changes and reforms, but a reconstruction of our Islamic thoughts and actions today.