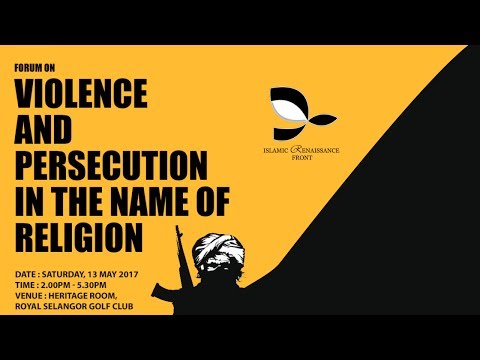 Forum on Violence and Persecution In the Name of Religion

For so long in the history of the Muslim civilization, we have witnessed various instances of violence and conflicts between Sunnis and Shiites. While most of them are political rather than theological in nature, the series of conflicts are often articulated in religious terms. The great political battle of Muawiyya and Ali has often been portrayed as the genesis of this division, and act as an exemplar on how politics can give birth to a more complicated theological set of doctrines and justifications.

The coming of modernity, arguably, has amplified and changed the nature of the conflicts, making it revolves around modern nation state apparatus. Today the Shiites constitute the second largest denomination of Islam, forming up to 20 percent of the global Muslim population. In Malaysia alone, there is a common agreement that adherents of Shiism formed a small number of the country’s overall Muslim population, ranging vary considerably from 2000 to 250,000 people. (The Centre for Academic Shi’a Studies)

But unfortunately, the community has been treated as second class citizens, and often come under increasing scrutiny by religious authorities. For example, a ban on Shia Islam is still currently enforced in 11 out of 14 states in Malaysia, originating from a fatwa that was released in 1996, by the Fatwa Committee of the National Council for Islamic Affairs.

Globally the trend seems to continue, and each sect often being repressed and persecuted by the majority sect in the country. We witnessed in the last few years, Shiites have been subjected to violence in Bahrain, Pakistan, Indonesia and Egypt, while the Sunnis in Iraq have been the target of Shiites militia during the presidency of Nouri al-Maliki.

Set against this background, this forum will try to examine the phenomena; and try to answer several questions: Are these conflicts largely theological by nature, or mostly political? What are the causes of this hatred? And are there any episodes in Islamic history where all sects in Islam can co-exist peacefully? Will the minority sects; Shi’a, Bahai, Ahmadiyyah, and others, ever be part of the Muslim ummah in Malaysia?