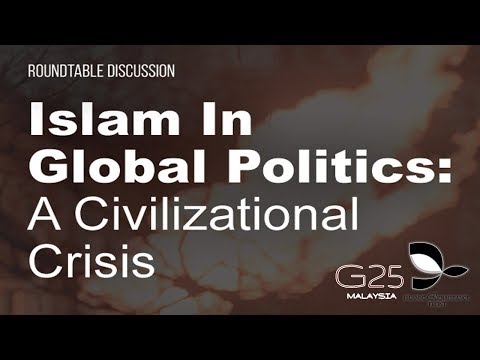 Roundtable Discussion On Islam In Global Politics A Civilizational Crisis

In the views of many, the contemporary world in which we live appears to be marked most prominently by the emergence of what is regularly referred to as “a clash of civilizations”. Proponents of the discourse of a clash have sought confirmation of their views by pointing to the increasing hostility and animosity between cultural regions — most obviously between the Islamic and Western worlds — that has defined the last quarter of the twentieth and the first decade of the twenty-first centuries.

The long list of incidents that have revealed the intensifying tension between the Muslim and Western worlds over the past few years is countless. The terrorist attacks of 9/11, the wars on Iraq and Afghanistan, and the interminable conflict between Israelis and Palestinians are merely the highest profile examples of a global politics whose ramifications extend to even the very local and regional levels.

And one may also point to the rising Islamophobic sentiment in other parts of the world which finds expression in such senseless acts as the burning of copies of the Qur’an to express hatred towards Islam. Similarly, the relative success of far-right political parties in Europe who are intent on marginalizing their Muslim communities. But on the other side, we also see a growing suspicion and reticence on the part of Arabs and Muslims to engage with Westerners on matters that may help develop their own societies.Could a proper understanding of the nature and purpose of dialogue with the other, a conscious effort to rebuild trust among different parties, and the emphasis and discovery of points of commonality help to solve this civilizational crisis? These are some of the issues that will be debated in this forum in view for a harmonious future for the world inhabited by all civilizations and cultures.