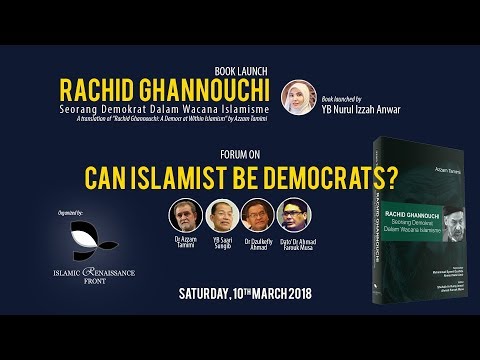 Forum On Can Islamists Be Democrats

Islamism or ‘political Islam’, refers to a wide variety of often competing movements that treat Islam as a central tenet of a political project. And an Islamist is a person who advocates a political agenda where the application of Sharia is central. Hence all Islamists are Muslims though not all Muslims are Islamists.

But the failure of the legalist approach of Egypt’s Muslim Brotherhood has had a significant impact on the way a young generation, see institutions and political systems. For the Islamists among them, it seemed that despite their efforts to understand and play by the rules, they would never be accepted. The masses were still sceptical that they would turn democracy to become an autocracy.

It was not surprising then, Ghannouchi’s Ennahda decided to separate politics from religion and proclaimed that there is no room left for ‘political Islam’ within the country’s democratic constitution. Ghannouchi boldly says: ‘We are Muslim Democrats; not Islamists!’

And here, the Muslim political rivalry in this country has also triggered the birth of a new group; the Muslim Democrats, from the womb of the Islamists. These two groups now are competing by using a different approach in getting the support of the people. While the Islamist group is continuing to champion its Islamic State agenda and the implementation of Hudud as a political ambition, the Muslim Democrats recognise democracy and freedom as the basis of their struggle.

Without doubt, this change from Islamist to that of Muslim Democrat – albeit by the formation of a new post-Islamist party – is an exciting development in this country for it somehow shows the maturity of the Islamists to embrace liberal democracy, multiculturalism, and pluralism to become Muslim democrats. This forum will address and discuss this phenomenon, of the changing trend and landscape in Muslim politics post-Arab Spring, within and without.