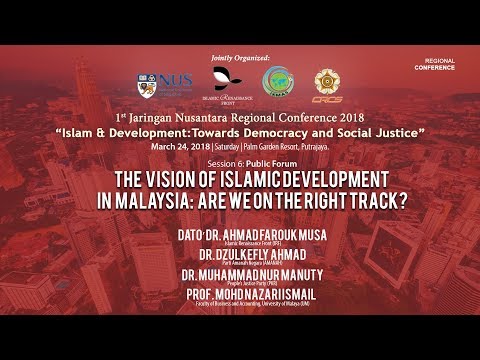 In Malaysia, we are always proud to claim to be among the more developed of Muslim nations, including on matters related to Islam. Since our independence, the development of Islam in Malaysia has evolved through rapid modernisation and advance institutionalisation. The process of development was highly influenced by the various authorities of Islam in the country.

For the past two decades, mainly driven by the Department of Islamic Development of Malaysia, or better well known as JAKIM, who holds a vision as to be the main agency to drive the success of the management of Islam in Malaysia towards the year 2020. This vision is to be achieved through a mission to drive transformation of the management of Islam through empowering Islamic agencies, strategically and innovatively for the best of benefits to the nation. On top of the authority given, the Federal Government in 2018 announced a total budget totalling more than RM1 billion, and more than 3,500 officials to supervise and coordinate the development of Islam in the country. In 2015, JAKIM produced a “Strategic Plan for Islamic Development 2015 – 2019”, which covers 7 core themes; Islamic law, R&D, strategic collaboration, Islamic understanding, Halal development, Islamic education, and organisational service. Looking at the current time, JAKIM has affectively played its role in implementing its mission along with the other associated agencies in meeting their goals of the development of Islam.

However, the operations by JAKIM in developing Islam in the country have been no short of critics. There have been complaints and allegations of over-regulations to the freedom of expression, religion and intellectual freedom, increasing dogmatisation of Islamic teachings, and increasing limitations to the rights of minority religious groups, not only among non-Muslims, but even more towards Muslims. Thus, the current trends have led us to raise an important question, whether the development of Islam and Muslims in Malaysia at the current time is on the right track? Have we touched on the important priorities and the higher objectives of Islam in our development plan? Could there be alternative ideas on Islamic development that we may have missed? This forum serves as a platform to discuss this topic and related questions further, in good faith, for the future development of Islam, and for the benefit of all Malaysians, Muslims and non-Muslims alike.