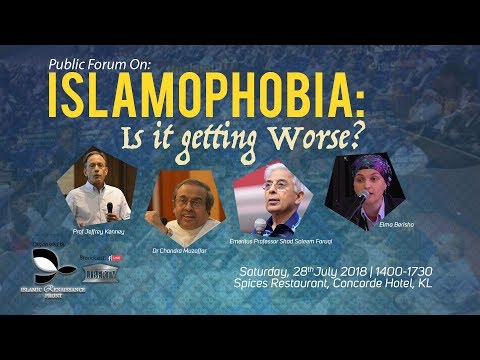 Public Forum On: Islamophobia Is it getting Worse

Edward Said, a renowned intellectual, penned the classic study of Orientalism as a discourse that not only stigmatized the Orient but also legitimized its domination by Western powers. The discourse, created and conveyed by an interlocking network of artists, experts, administrators, journalists and politicians, represents Islam as a monolithic and static religion, culture, indeed, entire civilization that resists not only change but, in particular, rational persuasion.

The discourse is furthermore reductionist and essentialist in that it portrays all Muslims as fully determined by an all-encompassing Islamic ethos. The discourse thereby denies Muslims the free agency and reason to adapt, alter or reject their faith. This supposition, moreover, conveniently dismisses Muslims’ self-representation as the nonsensical utterances of persons intellectually imprisoned by a benighted creed and culture.

In the Orientalist discourse, Muslims are represented rather than heard, suspected rather than trusted and governed rather than empowered. Finally, by creating the proverbial “negative other”, the discourse self-servingly projects a positive counter-image of the West and Westerners as utterly other and therefore superior to unenlightened Orientals. “The Orient,” writes Said, “has helped to define Europe or the West as its contrasting image, idea, personality, experience…European culture gained its strength and identity by setting itself off against the Orient as a sort of surrogate and even underground self.”

Hence this forum will objectively discuss and critically debate on this issue. Is Islamophobia real and normalised in many sections of the Western society in particular, and appears to be on the rise in all its forms? Or is it simply a fiction to shut down debate?