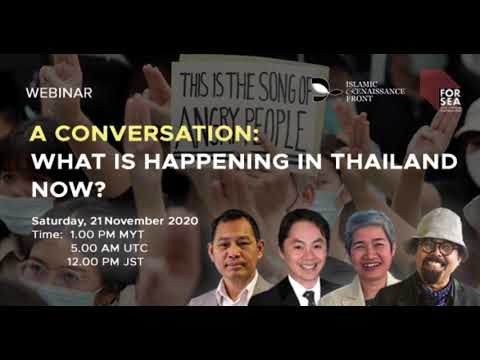 Webinar: “A Conversation: What is happening in Thailand now?” - Part1

The Thai people expressed their discontent with the government through massive demonstrations on the main streets around Bangkok from October 17-21, 2020. The protesters demanded that Prayut Chan-o-cha, the Thai Prime Minister who came to power through a coup d’état in 2014, steps down. His victory was disputed, with the demonstrators adamantly against the idea of Thailand being led by a former military general. However, Thai King Maha Vajiralongkorn inaugurated Prayut as Prime Minister for a second term on June 9, 2019. This seemingly undemocratic move has provoked various protests that are still ongoing and show no signs of abatement.