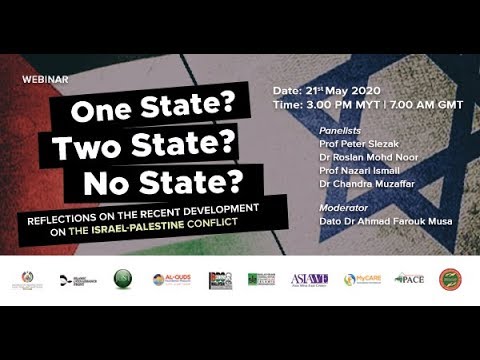 Webinar: One State? Two States? No State? Reflections on Recent Developments in the Israel-Palestine conflict - Part1

At the crux of the Israel-Palestine conflict is the dispossession of the Palestinians and their yearning for the restoration of a viable, independent state of their own. Israel and the Zionist movement backed by the elites in the United States of America, a number of European countries and other states have ensured that this legitimate Palestinian aspiration will never become a reality. The creation of the state of Israel in 1948 in violation of domestic norms of governance and international law on Arab Palestinian land was a major setback to the indigenous Palestinian people. Israel continued to expand its territory culminating in the occupation of the West Bank and Gaza, the remaining 22 % of original Palestine in 1967.